It’s beginning to look a lot like Christmas. The Coca Cola trucks are on TV, Michael Bublé has come out of hibernation, and Father Christmas visits Sale Waterside Arts.

Pins and Needles return to this theatre with another cracking Christmas show, after last year’s acclaimed production, The Bear. Bringing Raymond Briggs’ book to life, this family play shows a grumpy, but delightful, Father Christmas preparing for the big day. He dreams of warm holidays in Majorca as he cooks breakfast, feeds the reindeer, and gets the presents loaded on his sleigh. It’s just a normal day for Father Christmas, as he gets on with his job.

Fantastic puppetry by Richard Booth playfully animates the reindeer and Father Christmas’ pets, Cat and Dog. Injecting charm and comedy, Booth makes these animals believable and hugely entertaining, as Dog constantly eats Father Christmas’ clothes. This is perfectly partnered with Katy Sobey‘s brilliant music and sound effects. With impeccable timing, Sobey creates everyday sound effects, such as a boiling kettle, a running tap, and hilarious ‘plops’ when Father Christmas visits the toilet. This ‘poo humour’ was a huge hit with kids and adults alike. She also plays a number of instruments, providing the play’s joyful musical score. Remaining visible on stage, Sobey’s incredible talent was on display for all to see, adding even more fun to the show.

Although I don’t have kids, it is clear that this production enchants the children in the audience. There is an audible gasp in the theatre when Father Christmas opens his closet to reveal his red suit. There is laughter as he gets stuck in a chimney. But it is the spectacular appearance of his sleigh, pulled by reindeer, that puts the biggest smile on their faces. There are many ‘wows’ as Father Christmas flies through the air on his sleigh. The astonished amazement and joy of the children was lovely to see, perfectly capturing the spirit of Christmas.

Father Christmas is a wonderful, festive treat for the whole family. It kick-started Christmas for me. I have been writing this review listening to Christmas tunes, with a big smile on my face. Merry Christmas everyone!!

Father Christmas is on at Sale Waterside Arts until New Year’s Eve. All 18:00 performances are slumber shows, encouraging children to come dressed in onesies and pyjamas, with their favourite teddy bears. For an extra £2, you can book packs of milk and cookies too. 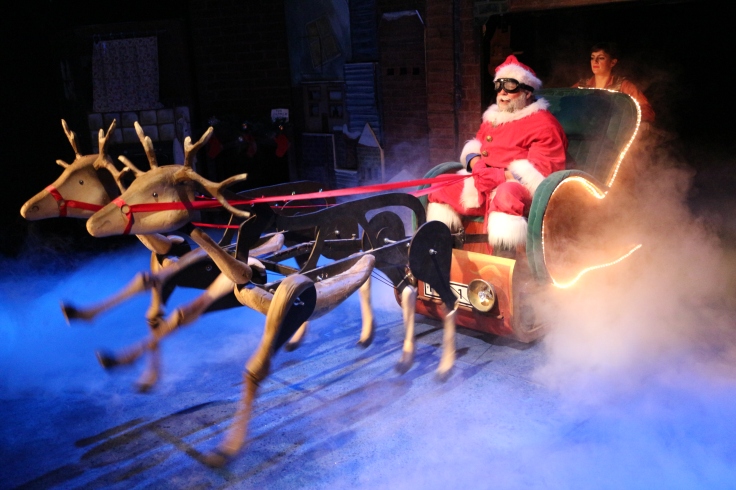