Life is constructed from a million small moments of seemingly little significance. However meaningless, these are the moments that define who we are. Adam Barnard’s Buckets is a collection of thirty-three interconnected small scenes depicting everyday life, from family matters and blossoming relationships, to depression and confronting mortality. Each scene is unique and captivating, encapsulating the diversity of human nature and the fact that we are all on borrowed time.

Barnard’s play is brought to the King’s Arms in Salford by four students studying a HNC in Performance and Production Arts at Preston’s College. Taking full control of the production, each student claimed responsibility for one element of the production, managing props, costumes, set and sound design themselves. With this project being assessed for acting and stagecraft, they didn’t want to simply perform it at Preston’s College. Instead, they raised funds to hire a fringe venue in Salford, attracting a wider audience and gaining critical experience. The students also decided that they would recruit a handful of extra actors, two of whom are professional, to help perform the plethora of characters in Buckets. The sheer ambition, determination and drive of these young people is staggering.

The students capitalise on this opportunity, making full use of the space. Each actor wearing black provides an effective blank canvas to which a simple personal prop is used to bring a character to life. A stethoscope around the neck signifying a doctor, a collection bucket representing a charity collector, a pair of headphones, or a bow in the hair separate characters. When there are countless characters to inhabit, this is a simple, yet practical way to provide differentiation with limited resources.

Likewise, the group inventively tackle the issue of having so many characters and performers in a restricted space. This is problem is resolved by keeping all actors on stage throughout the performance. Each actor bringing their chair centre stage provides an effective focal space for the action to take place, as the other performers sit observing. This means that the transitions between the thirty-three scenes are efficient and smooth, accompanied by the unnerving sounds of a clock ticking, which reminds us that time will always run out. That we are always one second closer to death. It is a clever choice of sound design that works incredibly well.

The fact that there is a mix between students and professional actors is not perceptible as there is a high standard of acting retained throughout Buckets. Because there are so many characters to inhabit, the actors are able to show exhibit the dexterity of their performance skills, skilfully switching mood and tone, from romance to tragedy and comedy. Usually these shows run a risk of repetition, where the characters and scenes all blend into one, feeling more like a recital. It is to this group’s credit that each character remains unique, believable and fully formed. Each segment is performed with attentive care, keeping each one different. 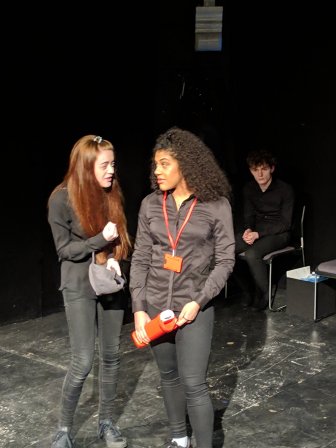 There are some truly lovely, tender moments in this play. Most notably, the unbridled joy mint humbugs can provide to two old ladies (the chairs brilliantly being used here as zimmer-frames). However, there is one scene that will stick with me for a long time. As a man stands on a train platform, preparing to commit suicide, he records his ‘note’ on his phone. Someone who has been watching him tries to mug him for his phone. Fixated on only stealing the man’s phone, not his money, the mugging causes the video to be deleted before the assailant answers a phone call from his victim’s mum:- “I think he really needs to speak to someone. Can you tell him you love him?“. This is a powerful, poignant scene which still remains thought provoking. Is the mugger really a saviour? Did he really want to steal the phone, or did he just want to help save a man from killing himself?

I have the utmost admiration for the students of Preston’s College for their determination, ambition and drive. Buckets is a finely polished production, proving that they have considerable talent. This is always a promising sign in young performers!

All production photos have been provided by John-Mark Reid.

Domestic abuse is mainly associated with heterosexual couples. It happens in #LGBTQ+ relationships too. Thank you @jasonandrew__ for telling your story in #MindGames, part of @turnonfestmcr @hopemilltheatre. A remarkable piece of #theatre that is profoundly important, powerful, and deeply moving. @superbia_mcr 🏳️‍🌈 #Theatre #Manchester #TurnOnFest #lgbtq🌈 #BadHabit
New #Theatre #Review on my blog! #CuttinIt @rxtheatre. ⭐⭐⭐⭐ A powerful, hard-hitting drama that treats a difficult subject with sensitivity and respect. It has taken a week to articulate my response to it. Magnificent performances from @ashahassan__ and @ihermona. Directed by the rather brilliant Nickie Miles-Wildin. #Manchester #Theatre #Review #RoyalExchange #Blog
Thank you @madamechandelieropera for guiding me through #opera last night. A hugely entertaining show. It was an honour to be your dresser, and your sea in #Rusalka 🧜‍♀️. Drinking games and 'cash prizes' definitely make opera much more accessible to the masses 😉 @kingssalford #MadameChandelier #GuideToTheOpera #Theatre #Salford #Manchester #Fringe @gmfringe #Comedy #Opera
New(ish) #Theatre #Review. My thoughts on watching @playwithfireproductions' #DannyAndTheDeepBlueSea for the third time. It never fails to move me, thanks to the breathtaking performances of @hannahellisryan and #DannySolomon. It was one of the best things I watched last year. ⭐⭐⭐⭐⭐. 📸 @shayster57. #Manchester #Theatre @kingssalford #Fringe #johnpatrickshanley