Every snowflake that falls from the sky is unique. Each has its own individual composition and identity. Hung Theatre’s Snowflakes is a collection of six short plays that are distinctly different from one another, but are all inspired by the ‘snowflake’ generation. As the plays are singular, I will write a separate review for each. 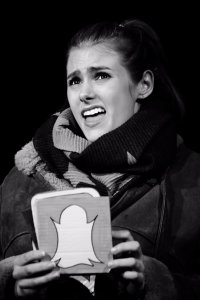 The first play in the collection renders an interesting contrast between the primal beginnings of human evolution into homo-sapiens and the modern age of digital communication. Expressive movement is used to depict primitive interaction between two female characters. However, the action took place on the floor, and as most seating in the King’s Arms is at floor level, this caused sight-line issues. Most of the audience had to strain their necks to discern what was happening.

These primal episodes are juxtaposed with depictions of modern life. A couple sit on a bench, morally debating human impact on the earth.  However, twelve actors shuffled around in the background, crowding the stage, causing an unnecessary distraction. I struggled to hear the conversation over this, as one actor wore heels, clunking on the wooden stage.

Likewise, the scene transitions also feel clumsy. Furniture is noisily dragged on and off stage, when the scene changes again from minimalist primitivity to a modern family conversing over dinner. In a small fringe venue, there are simply too many scene changes, and too much furniture in this short, fifteen minute play. It is a shame because Minefield is an interesting concept. 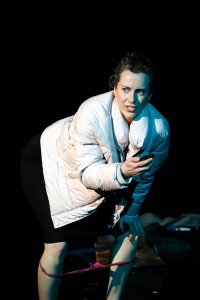 Without any transitions, and a minimalist set, this play made better use of the limited space. Eleanor Cartmill’s Think of England is a cracker! A hilariously honest, female’s account of a couple’s sex life, it brilliantly shows how one woman copes with a woefully inept boyfriend who struggles to find the ‘clitosaurus’.

Amy Webber and Keenan Groom are an entirely convincing couple, perfectly portraying the awkwardness of talking to each other about their sex lives.  An awkwardness multiplied after they have sex outdoors. Experiencing her first orgasm, Webber’s character realises that the forest’s plants make her more sexually aroused than her boyfriend. ‘A leaf gave me an orgasm’.

A combination of superb writing and acting, it is a pity that the play is only fifteen minutes long. I would love to see more of this abnormal relationship!

Often regarded as the most insulting word in the English language, Lewis Woodward’s play is guaranteed to cause offence. Brutally rendering the cyclical nature of a toxic relationship, it shows the strain that a baby can cause to a fractured relationship, before bluntly exploring how divorce can affect a child’s upbringing.

Andrew Long impresses as the unpleasant, slovenly, misogynistic dad, who interrogates his son about his mum’s new life, competing for favour. However, at times, it feels that this play overuses the word ‘c*nt’ to deliberately cause offence, rather than naturally applying the word to its dialogue.

Is it too early to wear Christmas jumpers in November? Would you wear one on a blind date? Kathy France’s comic short focuses on the pressures of online dating and highlights the crass consumerism of the festive period.

France’s depiction of a disastrous first date is amusing and entertaining. It is possibly the worst date of all time, as the couple are clearly incompatible. However, the play is spoiled by the unnecessary distraction of an eavesdropping waiter who provides visual gags alongside the couple’s conversation. The gags feel stretched at times, particularly when he starts decorating a Christmas tree. Needless, spontaneous interruptions of Christmas music are also jarring. The first date is funny enough in itself without these trivial disruptions.

Another stab at consumerism, this is a powerful reminder of how people of colour are underrepresented in the cosmetic industry. Writer, Tayiba Sulaiman, shines a spotlight on the racial prejudices a young black woman faces when buying make-up for a wedding. In All Fairness gives an uncomfortable insight into the catastrophic damage that this causes to a woman’s self-esteem.

‘Would you like a lighter shade of make-up for your skin?’

Watching Lauren Sturgess’ beautician shamelessly sell her skin bleaching products is cringe-worthy. It is shocking to see how the cosmetic industry is loaded with casual racism. Patience Kanjira gives a fantastic performance as a young black woman, influenced and coerced into buying skin whitening plaster. Powerfully moving and loaded with sadness, Kanjira’s character is an exploited victim of a morally corrupt industry that capitalises on low self-esteem. This is a poignant, thought provoking play.

My favourite play of the evening, Joe Clegg’s Lovin’ It gives a hilariously realistic snapshot of what McDonald’s is like at 4am after all the clubs have closed.

A plethora of characters collect their food orders, as a relentless tide of customers invade the fast food chain. Rotating characters, from a gang of drunken girls, to a rowdy group of Manchester City fans, brilliantly renders the hustle and bustle of a city centre McDonald’s. You can naturally relate to Clegg’s play, and it is easy to imagine that this is what workers at the Market Street store face on a daily basis. Clegg’s play provided a euphoric end to the evening.

Snowflakes is an interesting collection of six unique short plays, that all have great potential. Personally, I believe that some are executed better than others, but each play manages to engage and entertain its audience.

All photos provided by AG Shot.

Just finished the Frieza Saga, and am now on episode 108 of #DragonballZ.
Love my new #FunkoPopVinyl 😊
Watching my first play since March 2020 tonight. Beyond excited!!! 😁
Working through #DragonballZ, after loving this show when I was a teenager, but only ever catching the odd episode on Toonami.