Despite the world seeming stuck in a perpetual purgatory of Brexit, Donald Trump and global warming, there is still cause to celebrate. Manchester’s theatre scene continues to thrive. Whether you go regularly, or have made a resolution to see more theatre, there is always plenty to watch.

Here are my suggestions of what you can watch this month across the city. 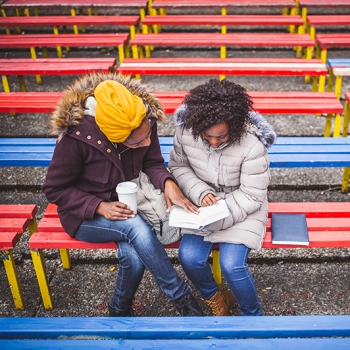 Both born in Somalia 15 years ago, the pair fall into a close friendship. A shared secret brings them closer together, but also pushes them apart.

Charlene James‘ Cuttin’ It boldly confronts the vital issue of FGM in Britain. It is a harrowing, heartbreaking, yet deeply tender play that will be directed by the Royal Exchange’s former Assistant Director, Nickie Miles-Wildin. She is a fantastic, visionary director, who I greatly admire. I was delighted to see her appointed as the Artistic Director of Graeae Theatre Company.

There is a content warning for this show, as it tackles profound, sensitive issues. However, with such a talented creative team, I am confident that the subject will be treated with the utmost respect and care. 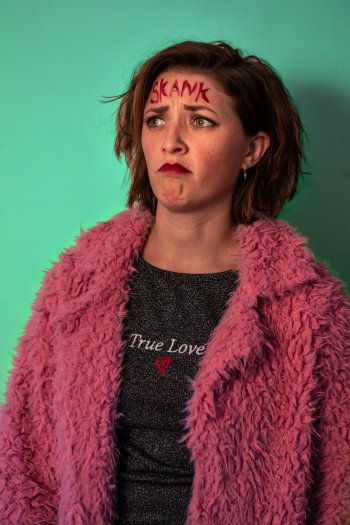 Skank is a wickedly funny one-woman show written by Clementine Bogg-Hargroves and directed by Zoey Barnes. It is a magnificent debut that exploded onto the Greater Manchester fringe theatre scene; instantaneously winning fans, and controversially getting reviewers banned from Twitter. Trust me – Don’t go hashtagging the show’s name!

Along with their splendid Austen Power, Skank cemented the reputation of Barnes and Bogg-Hargroves as one of the best comedic double-acts in town. They work so well together and create shows that are both hilarious and moving.

Here is my original review of Skank. I loved it so much, I will be watching it a second time.

Tickets can be found through the website of the King’s Arms.

There is so much in the Turn On Fest that looks fantastic, I might need to clone myself. Mother’s Ruin present two evenings of new work, there is An Audience With David Hoyle, and Trans Creative provide an open mic night showcasing queer talent; Stand By Your Trans. They did something similar at Sale Waterside’s Pride in Trafford festival, and it was a total blast.

Mandla Rae will be performing a new work-in-progress, As British as a Watermelon and Qweerdog Theatre bring their play, Absolute Certainty? to the stage. In an environment where no-one is safe to talk about feelings, let alone sexuality, it’s easy to misread the signs. One drunken night, a line is crossed between Finn and Lee; but by who? What actually happened? It’s difficult to find out when nobody wants to talk.

What I am looking forward to most is Minute Taker‘s Wolf Hours. Performing his music alongside videos, Wolf Hours explores the psyches of several gay men at different points in time over the past century. This is something I watched in 2019, and I was captivated by Minute Taker’s gorgeous, haunting voice. I signed up to his Secret Songs, and have been a fan since. I am excited to watch this piece again.

Here is the full list of events happening over the Turn on Fest. You can purchase tickets via Hope Mill Theatre’s website. 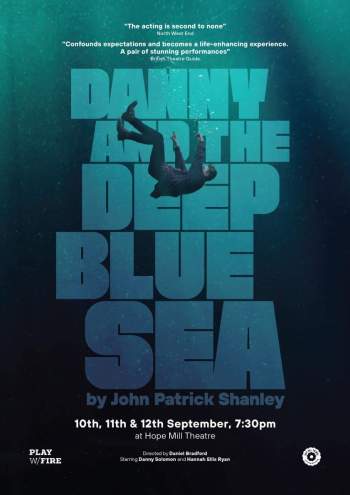 “I could eat glass. I could stick my hand into the fire and watch the thing burn, and I still wouldn’t be out of this fucking head!”

Third in my Top 10 Theatre Shows of 2019, Danny and the Deep Blue Sea is a fascinating character study of the unspoken depths of humanity. It brutally explores the violence, insanity, love and hatred that can occur between two people.

Danny is a trucker who people call ‘The Beast’. He thinks he just murdered a guy in a fight. Roberta is a troubled young mother with a teenage son. Both deplorable individuals, it is captivating to watch how these two loathsome people warm towards one other. Without being sentimental, the abhorrent violence of each character disturbingly compliments the weaknesses of the other. This relationship in John Patrick Shanley‘s play is so complex that it has been seared on my mind since I first watched it.

The characters are perfectly rendered by Hannah Ellis-Ryan and Danny Solomon, and their performances are astonishing. It was, without doubt, the highest level of acting I saw in 2019. They were both rightfully nominated for Best Actor in the GM Fringe Awards.

I will be watching this for the third time, and as tickets only cost around £11, it proves that you don’t have pay a fortune and travel to London’s West End in order to see actors who are at the top of their game.

Please visit the King’s Arms’ website for more information, or to book tickets. You can also read my full review of the play here.

HOME is one of the most exciting venues in Manchester. It is a thriving hub of art, cinema and theatre, with a lovely restaurant and bar.

They also host an annual festival that shines a spotlight on emerging creative talent. Over two weeks, artists are given the opportunity to stage their works. The Push Festival has something for everyone to enjoy, from theatre to film, dance, music, workshops and exhibitions.

Here is a small selection of the theatre on offer during the festival.

Oreo (23rd – 25th January 2020) = Tania Camara draws on experiences of different successfully educated black women in European politics, challenging the idea of whitening the self in order to achieve success. Oreo asks what it means to be authentic to yourself.

Bost Uni Plues (29th – 30th January 2020) = Apparently, university is the best three years of your life! So what happens next? Join three clowns as they leave the comfort of student life behind and enter a world full of expectation, proper jobs, and council tax.

The Royal Exchange have produced a high calibre of musicals, from The Producers to West Side Story. Traditions are continued with their new revival of Gypsy, which has had its run extended into February.

Gypsy is a magnificent musical about Mamma Rose, who pushes her children into the world of show business, living her life through her two daughters, Louise and June. At a young age, their cutie-pie family act strikes gold, but will it last when the girls grow up?

Gypsy is the ultimate celebration of the glamour of showbiz, which doesn’t fail to show the hard graft that you have to put in to achieve fame. It also shows the power of the mother-daughter bond.

It has a superb cast, with Ria Jones and Melissa James both providing stellar performances. James’ astonishing transformation from Louise to Gypsy Rose Lee is worth the ticket price alone!

With fantastic songs, written by Stephen Sondheim, I highly recommend people to catch this wonderful musical before its run finishes.

Tickets are available through the Royal Exchange Theatre’s website or via their box office phone line on 0161 833 9833.

Clearly, this is only a handful of the fantastic plays on offer across Manchester. I encourage everyone to visit their local theatres. Every theatre is a charity and they really do need your support. Local artists and theatre companies need audiences as much as mainstream productions.

I am passionate about showing that you don’t have to break the bank, or travel to the capital, to watch top quality theatre. Regional theatre is not dying. Fringe theatre is thriving. Hopefully, over 2019, my blog has shown that. I will carry on delivering this message by supporting local theatre throughout 2020.