Based on the 2003 film, School of Rock has been adapted for the stage by Andrew Lloyd Webber and has just embarked on an extensive UK Tour, finishing in August 2022. It is a musical that follows the exploits of wannabe rock star, Dewie Finn (Alex Tomkins).

When slacker Dewie gets fired from his job for always being late, and gets kicked out of his own band, No Vacancy, his hopes of competing in the Battle of the Bands are shattered. He can’t afford to pay his rent and all seems hopeless. Posing as a substitute teacher at a prestigious school, Dewie earns a few extra bucks and makes the discovery that these school kids can actually play musical instruments. If he can convert them from Mozart to AC/DC, he might have a shot at entering the competition after all!

The success of School of Rock hangs on the stupendously talented ensemble of kids who attend Horace Green. A recorded announcement from Lloyd Webber, before the curtain rises, informs us that the children do actually play their instruments live on stage each night. They do so with incredible skill, passion, and infectious joy.

Harry Churchill‘s lead guitarist Zack slays some insane riffs which would make adult guitarists jealous. Daisy Hanna‘s Katie boldly struts around the stage with a great deal of swagger and sass, rocking the show with her unbelievable bass playing. Then there’s Thomas Harvey who plays drummer Freddie with all the energy and skill of a young Roger Taylor, effortlessly twirling his drumsticks in the air whilst playing.

These extraordinary performers are equally as talented as the professional adult musicians sat in the orchestra pit and they fill the show with high-octane vivacity. But the real standout performance from the young cast is Jasmine Djazel as quiet, shy new-girl Tomika. As the character slowly comes out of her shell, she stuns her class, and the audience, with her astonishing vocals, as she beautifully sings Amazing Grace. Receiving a thunderous applause and cheering from the audience, it’s one of those moments when you’re left speechless by just how incredibly talented someone is, and your only response is “wow!”.

With a large ensemble, the principle student roles change each night on rotation, so you may end up watching different actors in these roles, but they will all be phenomenally talented, and I’m certain they have bright futures ahead of them! 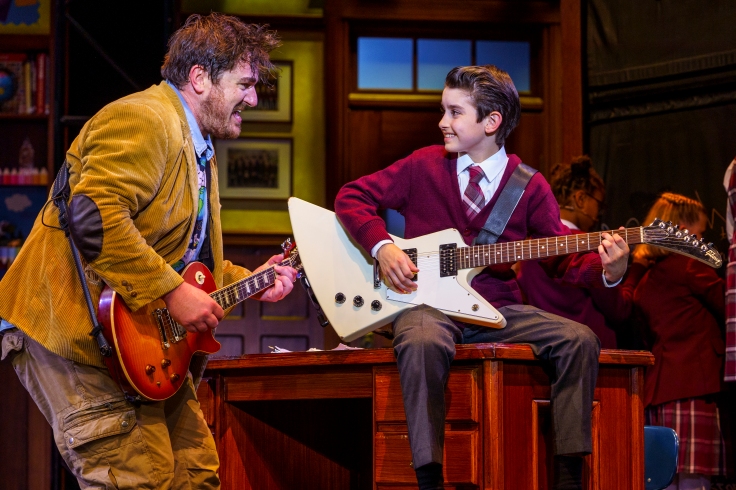 Alternate Dewie Finn, Alex Tomkins, gives a sublime performance, perfectly matching Jack Black’s vocal range and incorporating the mannerisms that made his performance in the film so memorable. Tomkins also hilariously emphasises the slovenly nature of his character through gross physical comedy, making Dewie Finn even more of a disgusting slob.

However, he seems to come alive whenever playing or talking about music. Tomkins builds a fantastic rapport with his students and, in these scenes, has a charming charisma and delightful spark in his eyes, letting us empathise with a character that has few other redeeming characteristics. Tomkins perfectly captures the duality of Dewie Finn; the gross layabout and the passionate teacher of rock music.

Rebecca Lock also impresses as headteacher Mrs Mullins, with a soaring operatic voice, absolutely nailing the staccato notes of Mozart’s Queen of the Night aria from The Magic Flute, which is notoriously difficult to sing. Watching Lock’s character loosen up from an uptight teacher to a rock chick is wonderfully uplifting, leading all adults to question why they lose their passion as they grow older and settle into the mundanity of life.

Andrew Lloyd Webber wrote a host of new songs for this musical stage adaptation. Some of them work better than others. Stick It To The Man is one of the resounding highlights of the show, with its dynamic aggressive energy and memorable lyrics meaning it easily gets stuck in your head.

Although sung well, the ballads slow the pace of the show and feel slightly out of place. This is most noticeable with Mrs Mullins’ song in Act 2, Where Did The Rock Go? Audience members started to fidget and shuffle in their seats, losing their concentration and checking their phones. I understand that there has to be a balance between songs that rock and character development, but given that Mrs Mullins is a huge Stevie Nicks fan, it would’ve been nice for her pivotal song to have been more upbeat.

It could have been because I was up in the Gods, right at the back of the Grand Tier, but some of sound was slightly off. There were several occasions where the performer’s microphones didn’t work or had a delay, resulting in missing some of the dialogue. It happened during Tomika’s solo during the School of Rock song, which was disappointing because as I mentioned earlier, Jasmine Djazel has an astonishing voice.

Like the film, the climax of School of Rock is the much anticipated Battle of the Bands. Like the film, it doesn’t disappoint and it feels almost like we’re transported to a rock concert, instead of being in a theatre. Again, the band are insanely talented, and they really maximise this moment to shine. It is one of the most exciting endings to a musical that I have seen.

If you need an antidote to the endless stream of depressing news, then School of Rock is the perfect show for you. Hugely uplifting, packed with talent, and with fantastic music, this musical will rock your socks off!

When you watch @rammsteinofficial , you know you'll get one hell of a show.
Tonight's #theatre trip to the arches...
New #Manchester #Theatre #Review!!
Treated dad to #topgunmaverick today. It's the perfect example of why #cinema will never die.
Watched my first Charlie Chaplin film tonight, accompanied by a live orchestra. What a wholly heart-warming experience 🥰 It sounded beautiful. The film was more moving than I expected too!